We believe in the power of design. The one that saves us from the most trafficked roads, that lets us spot the emergency exit in Tokyo or in Berlin, that helps (almost) all of us putting that Swedish piece of furniture together.

We officially open a visual translation season of all the norms and values that shape our collective life, as to make them part of a common heritage, so that civilisation’s accomplishments can relish those forces only symbols are capable of releasing.

We already rendered the first 12 articles of the so-called ‘Costituzione più bella del mondo’, each becoming a clear-cut symbol. By combining them together, the Constituents’ words’ spirit comes through. ↓

Italy is a Democratic Republic, founded on work. Sovereignty belongs to the people and is exercised by the people in the forms and within the limits of the Constitution.

The Republic recognises and guarantees the inviolable rights of the person, as an individual and in the social groups within which human personality is expressed. The Republic requires that the fundamental duties of political, economic and social solidarity be fulfilled.

All citizens have equal social dignity and are equal before the law, without distinction of sex, race, language, religion, political opinion, personal and social conditions.

It is the duty of the Republic to remove the economic and social obstacles which by limiting the freedom and equality of citizens, prevent the full development of the human person and the effective participation of all workers in the political, economic and social organisation of the country.

The Republic recognises the right of all citizens to work and shall promote such conditions as will make this right effective.

Every citizen has the duty, according to capability and choice, to perform an activity or function that contributes to the material or spiritual progress of society.

The Republic, one and indivisible, recognises and promotes local autonomies, and implements the fullest measure of administrative decentralisation in those services which depend on the State. The Republic accords the principles and methods of its legislation to the requirements of autonomy and decentralisation.

The Republic shall protect linguistic minorities by means of specific measures.

Lo Stato e la Chiesa cattolica sono, ciascuno nel proprio ordine, iThe State and the Catholic Church are independent and sovereign, each within its own sphere.

Their relations are governed by the Lateran Pacts.

Changes to the Pacts that are accepted by both parties shall not require a constitutional amendment.

All religious confessions enjoy equal freedom before the law.

Religious confessions other than Catholicism have the right to organise themselves in accordance with their own statutes, to the extent that these are not in conflict with the Italian legal system.

Their relations with the State shall be regulated by law on the basis of agreements with their respective representatives.

The Republic shall promote the development of culture and of scientific and technical research.

It shall safeguard natural landscape and the historical and artistic heritage of the Nation.

The Italian legal system conforms to the generally recognised rules of international law.

The legal status of foreigners shall be regulated by law in conformity with international provisions and treaties.

A foreigner who is denied, in his or her own country, the effective exercise of the democratic liberties guaranteed by the Italian Constitution shall have the right of asylum in the territory of the Italian Republic, in accordance with the conditions established by law.

Extradition of a foreigner for political offences is not admitted.

Italy rejects war as an instrument of aggression against the freedom of other peoples and as a means for the settlement of international disputes. Italy agrees, on conditions of equality with other States, to the limitations of sovereignty that may be necessary to a world order ensuring peace and justice among the Nations. Italy shall promote and encourage international organisations furthering such ends.

The flag of the Republic is the Italian tricolour: green, white and red, in three equal vertical stripes. 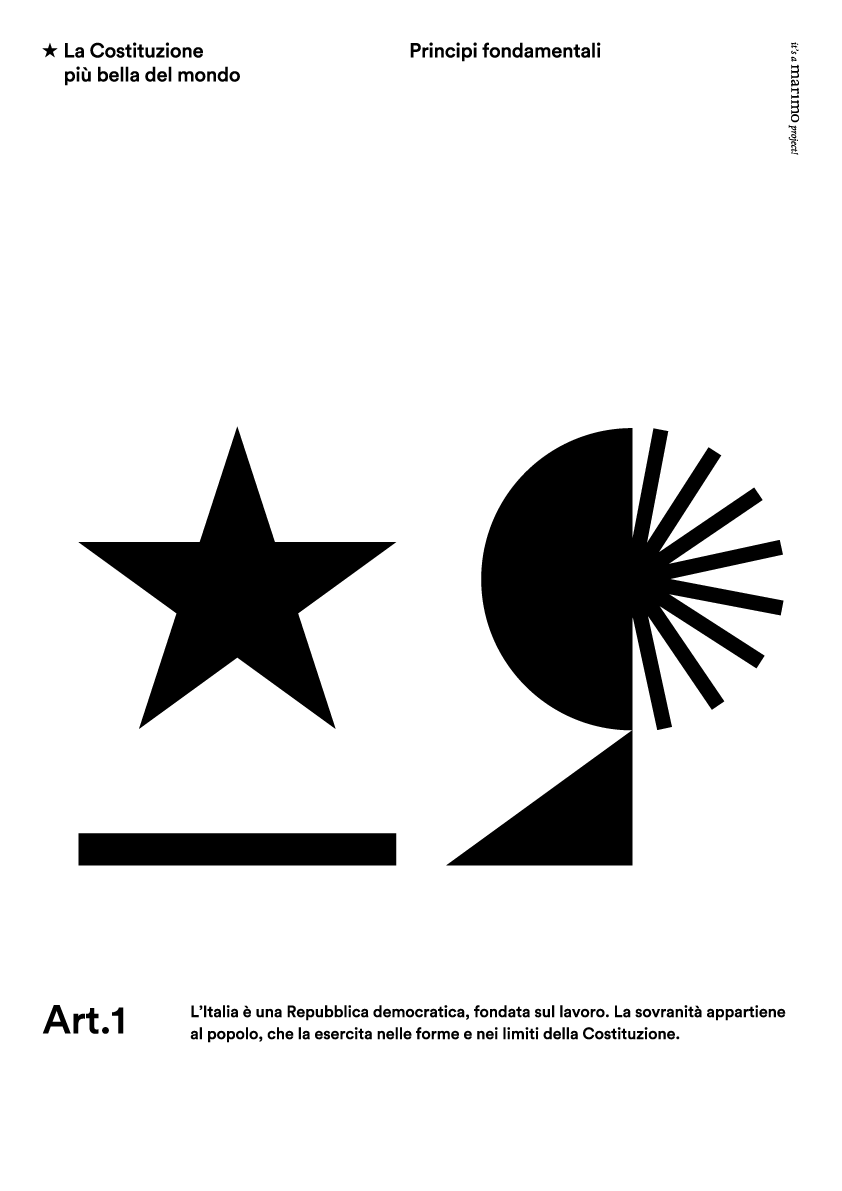 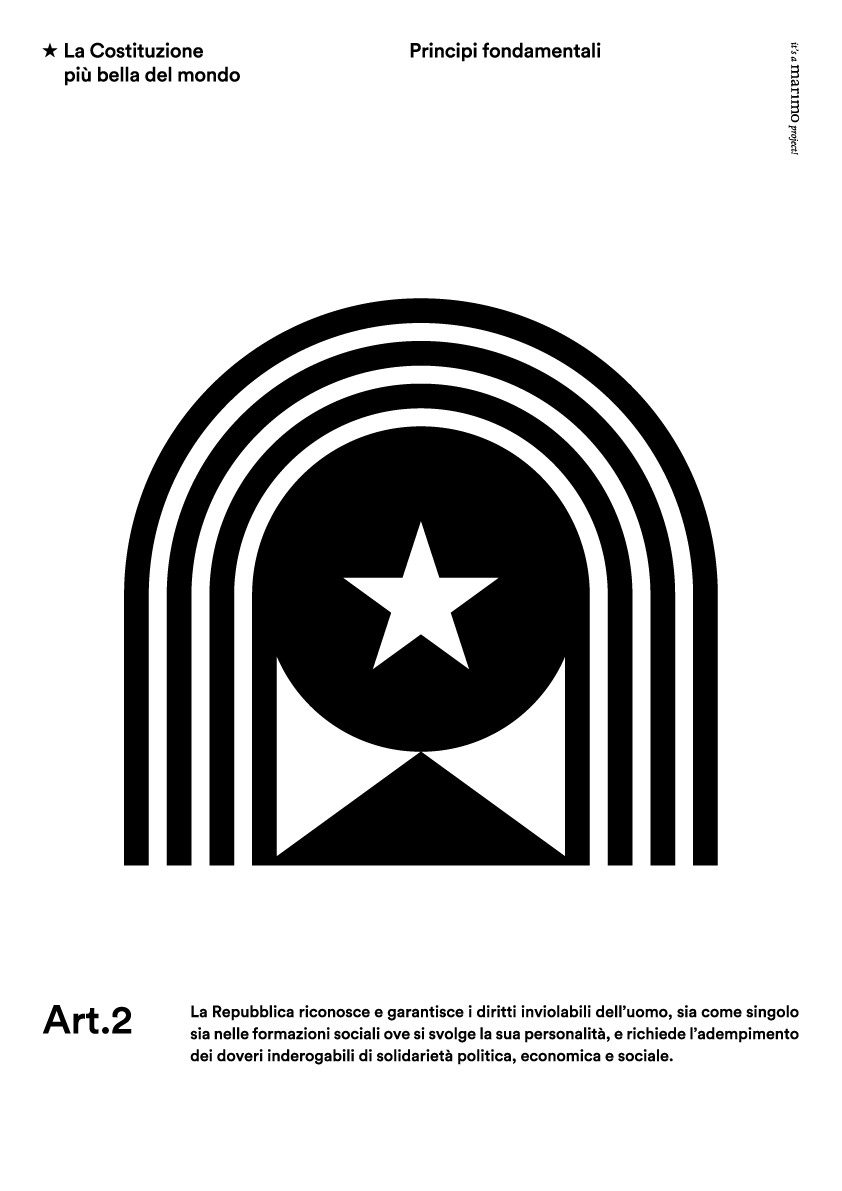 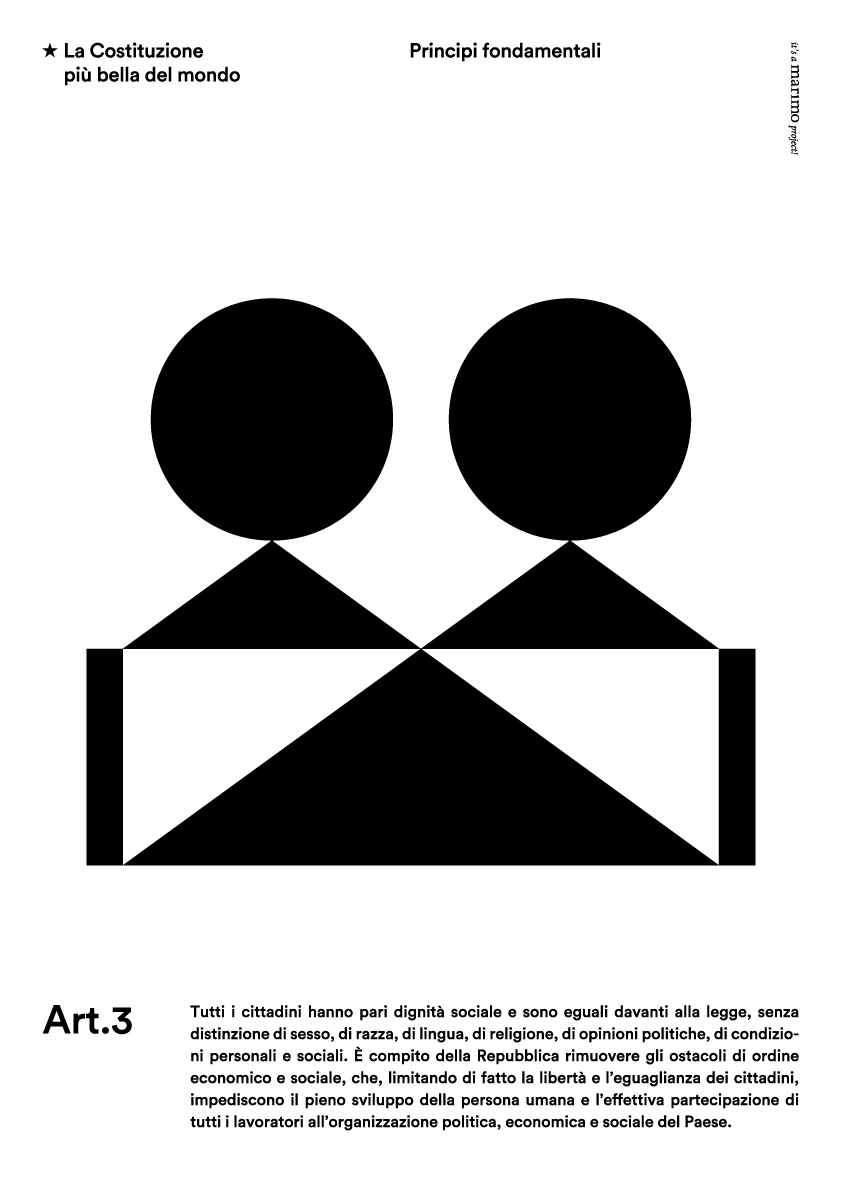 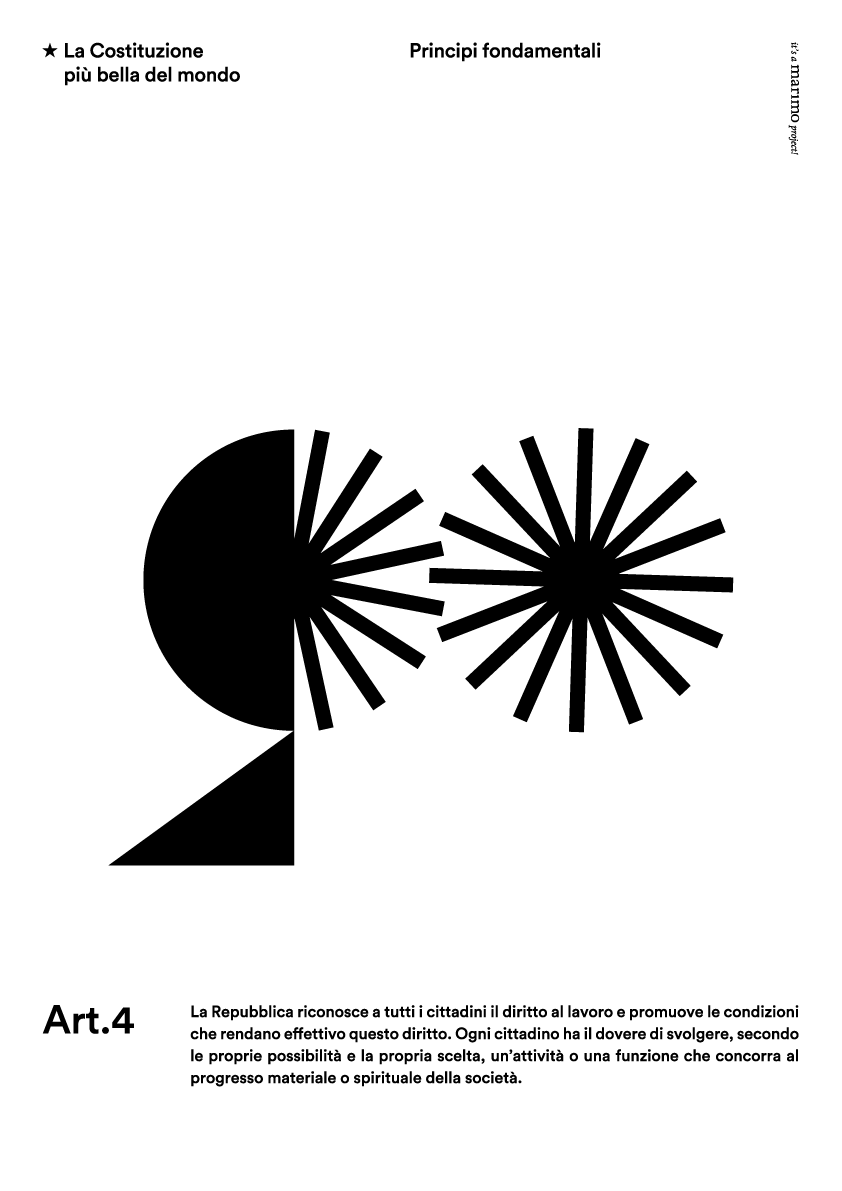 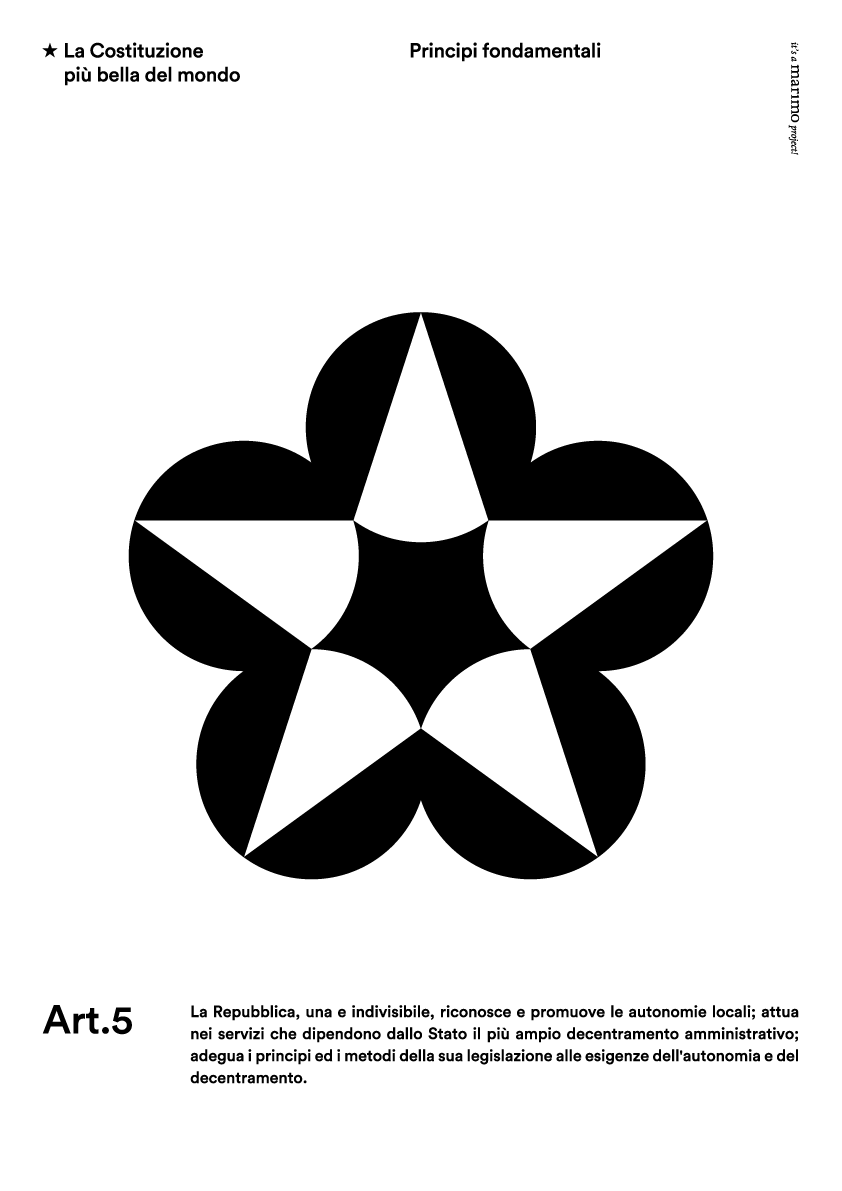 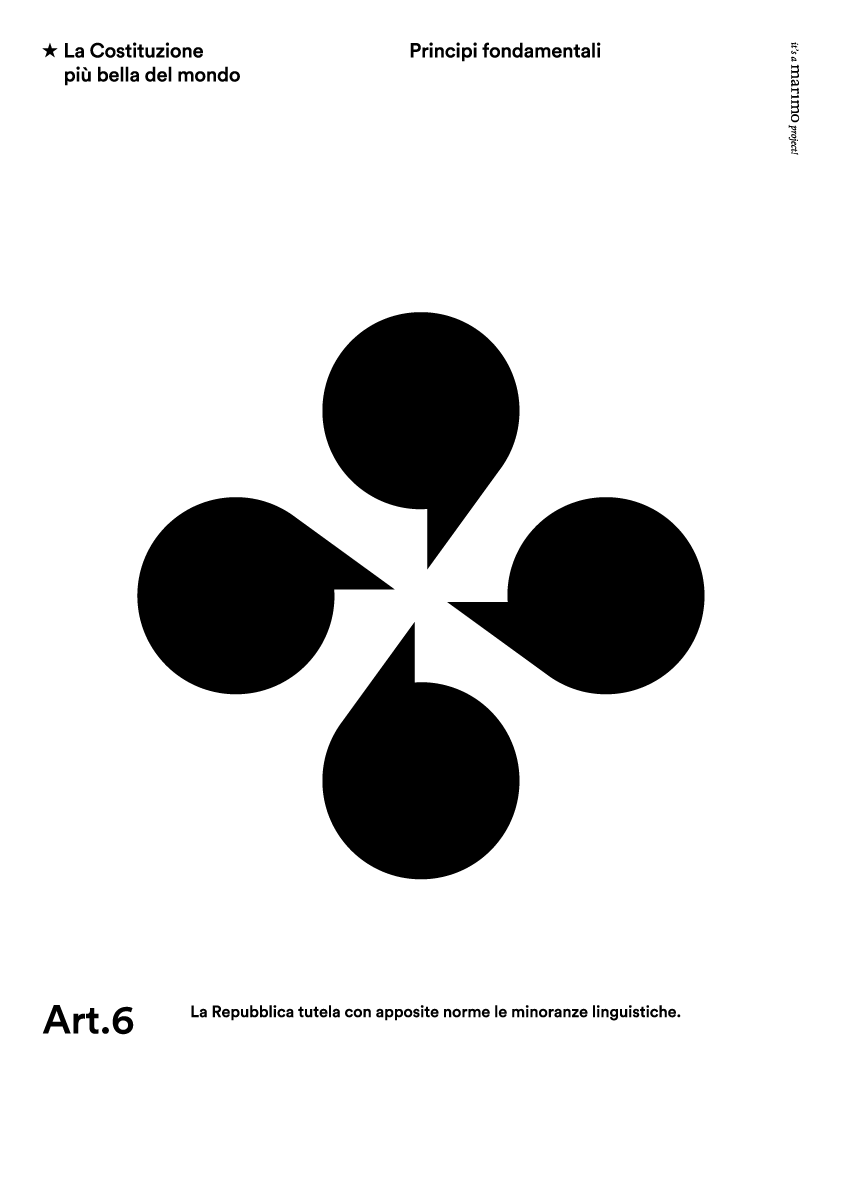 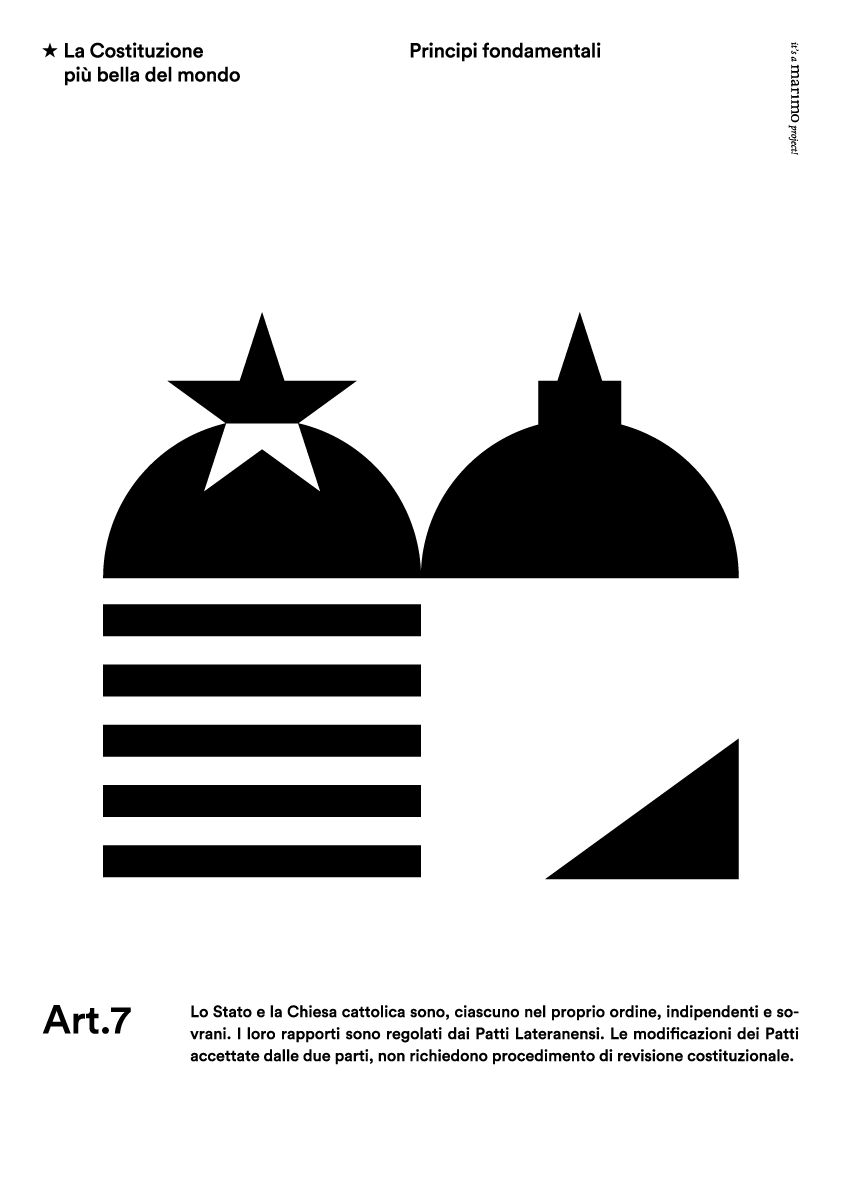 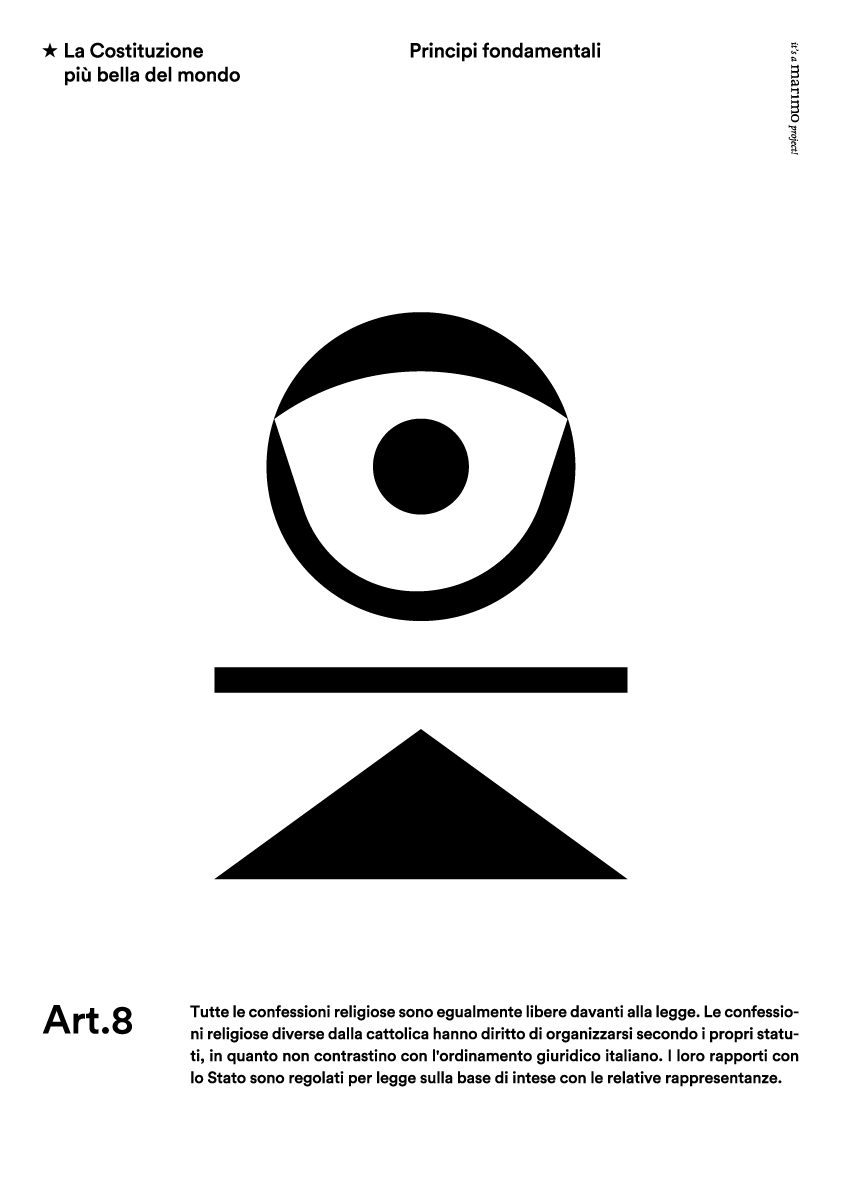 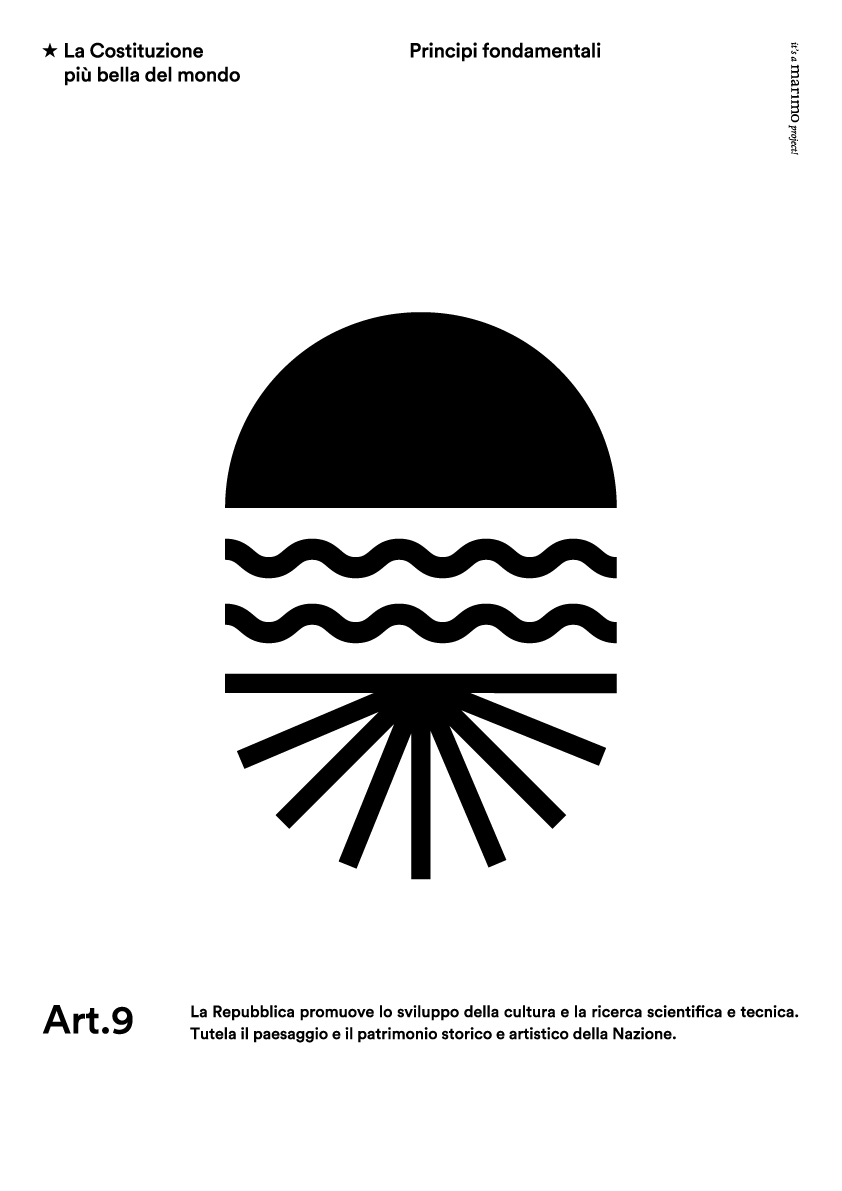 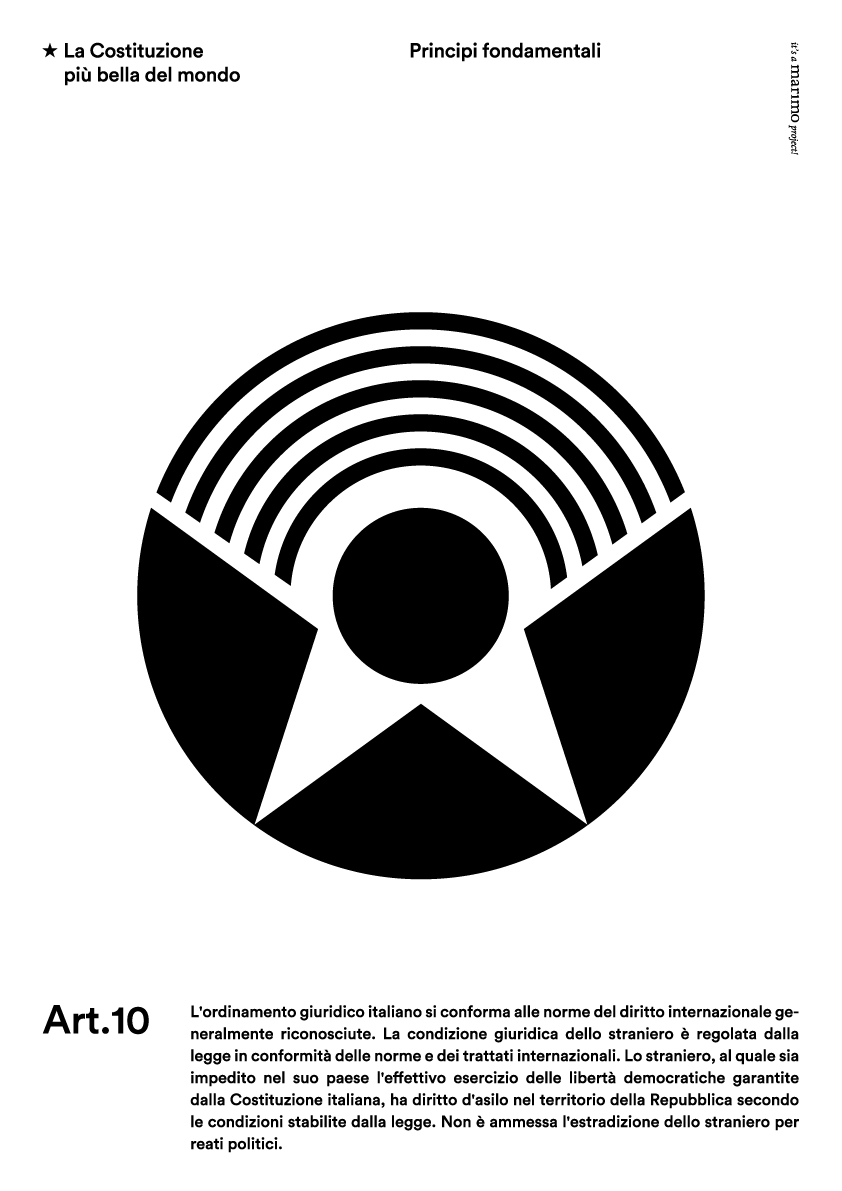 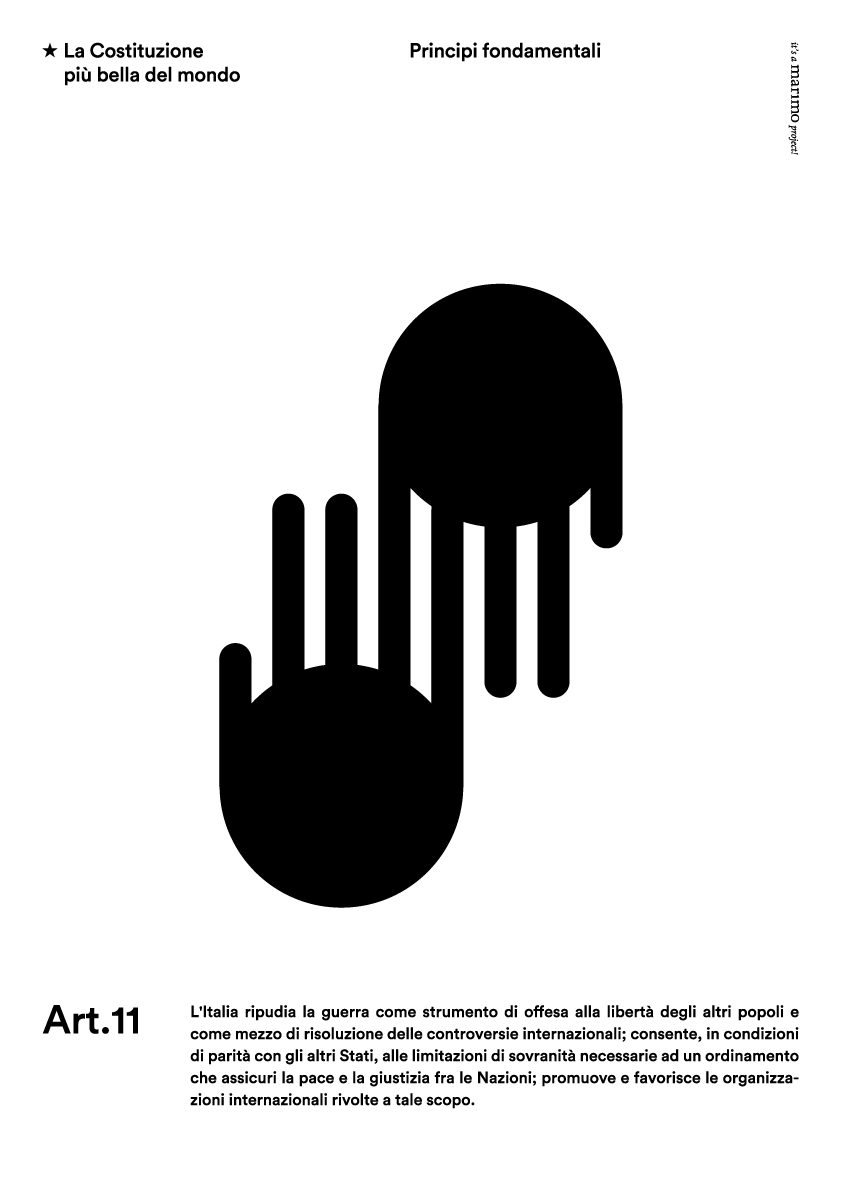 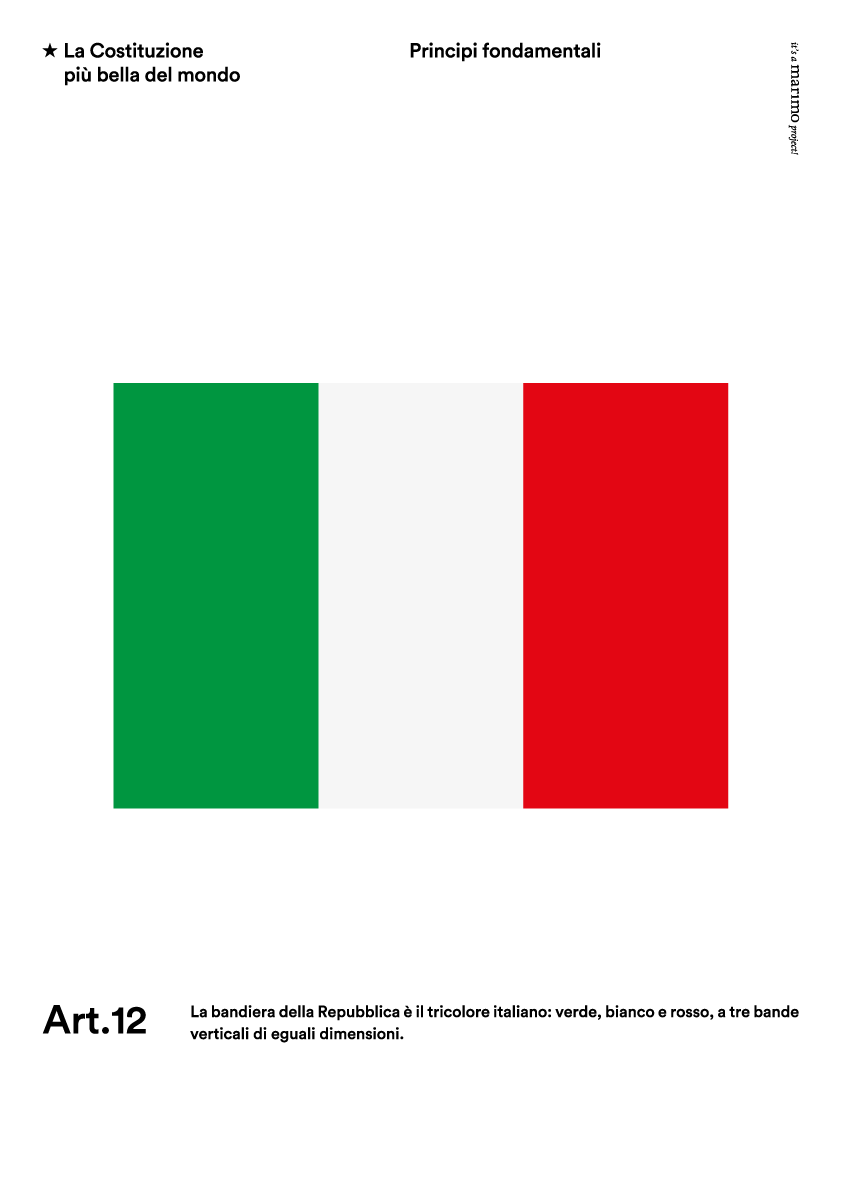 We want for this project to be adopted by all those feeling represented by it. We want to see it on classrooms’ and bedroom walls, council rooms, town and city squares, or down the metro stations.

Accordingly, we publish it under the system of Creative Commons Licence CC BY NC ND

If you encounter problems with the printing or downloading, do not hesitate to contact us at:
→ [email protected]